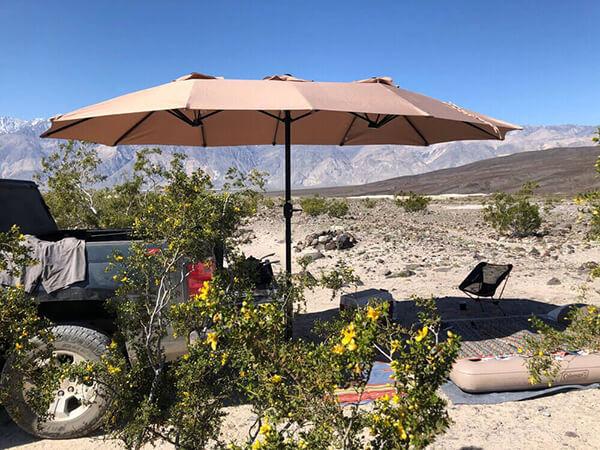 As we all know 2020 was rough. Being a longtime San Francisco resident and metal worker, I found myself jobless amidst the global pandemic in March 2020. The Bay Area’s lockdown went into effect and like many, I was left confined to a small apartment in one of the most expensive cities in the country. I had to escape.

I promptly decided to ditch the cramped confines of the city and self-isolate in the wilderness. I explored which national parks were still open to the public and soon discovered Death Valley was the only viable option. I immediately realized that if I were going to travel to the hottest place on Earth — I was going to need some serious SHADE.

That evening I researched mobile shade structures currently on the market, but quickly realized there were surprisingly limited options. Side mounted awnings were not compatible with my pickup truck and the few hitch-based umbrellas that existed were poorly designed and cheaply constructed. The most obvious inefficiency was the lack of overall quality; the hitches were made of thin gauge steel, flimsy and sagged off the end of vehicles. The umbrella shaft and canopies were undersized and provided only a drop of shade. I thought to myself, there had to be a better way.

The next morning, I purchased the largest patio umbrella I could find and utilizing my 15+ years’ experience in high-end design and fabrication, I built an original hitch prototype that solved all these problems.

The following week, I set out for a 6-day solo adventure in the desert and put my new design through the ultimate test, in one of the most arid environments in the world. I soon discovered over the course of my journey that not only was the assembly incredibly easy to use and quick to deploy (60secs), but it also created something of an outdoor living space. An artificial roof, providing abundant shelter and relief from the sun, sparking envious onlookers among the few places I visited.

This successful product performance encouraged me to think bigger and in summer 2021 Humbra was launched to the public with the sole mission of providing a high-quality product and contemporary design to the mobile sun protection market.